While walking up one of my favorite hiking routes, I heard some voices coming down the path. Stepping aside into a copse of spruce trees, but still in the open, I politely gave the hikers the right of way on the narrow trail.  Surprisingly, as the couple walked by in animated discussion, they passed right by me without seeing me. How is this possible I thought?

Analyzing the situation, there were several factors involved. The couple was actively engaged in a conversation making them less aware of their surroundings, and they seemed comfortable hiking in the area with no apparent safety concerns. Basically their “situational awareness” was close to non-existent.

For my part, although I was not wearing camouflage, I was dressed in muted earth tone colours and "I did not move" as they walked by. This wasn’t on purpose, in fact I fully expected them to see me and was prepared for the inane greetings of people who pass on the trail. At first blush, I thought that it was this unique combination of circumstances that made it possible to go unnoticed even though I was in plain sight and was in spitting distance of the closest hiker. Subsequent research showed that the real reason for my invisible act is even more surprising.

Although the above-mentioned details were all important factors that helped explain why the hikers did not see me; there was one crucial detail that I had overlooked…the fact that I was “standing inside the tree line.”

Cognitive psychologists who study human awareness have noted that the mind plays a funny trick when it perceives a physical barrier… the default condition is to not see anything beyond a wall. Remarkably, this “wall” doesn’t have to be a solid object but can be any representation of a barrier such as a tree line or even a chain-link fence. Under most circumstances we simply don't look beyond these mental barriers. While explaining this phenomenon in subsequent tracking classes, I coined the phrase “mind veils” to help students understand the cognitive process.

Armed with this new information, I returned to the same familiar trail, but with one difference…I consciously looked past the veil of trees along the trail. Keep in mind that I have hiked this trail as often as once a week for over forty years so I wasn’t expecting any major revelations. To say that I was wrong would be a gross understatement. On one - 4 kilometer (2.5 miles) pass up the trail, I found items like an unbroken 1960’s glass root beer jug and a wrecked 1950’s car. I also spied a hunting stand, and a game trail camera. More disconcerting was seeing the remains of an abandoned marijuana grow operation that at one time was fairly sophisticated, complete with an underground irrigation system. This discovery begged the question, "how could a large marijuana grow operation be established, cultivated, harvested (for how many years?), and ultimately be abandoned (or shut down) without myself or some other hiker having noticed it? What else are we missing in our daily travels due to our inability to actually see beyond perceived barriers?  On this hike, armed with an understanding of “mind veils” and looking past the wall of the trees lining the path, all of this was easily seen – and in most cases, very close to the trail. What a shock.

The best part is that by recognizing mind veils, a whole new world has opened up. For instance, being a passenger on road trips allows me to observe beyond the trees, fences and other perceived visual barriers along the highway to see what is hidden – often in plain sight. Another example is in architecture. While dining at an industrial chic style restaurant I noticed that the designer overhead lights were suspended from some wood slats equally spaced above the tables. These wood slats are designed as mind veils to catch the eye so the open ceiling joists, exposed wiring, plumbing and HVAC – although easy to see if you are looking beyond the veil, doesn’t normally register with the conscious brain.

The interesting thing is that mind veils are not a new concept. The military has been on to this since the beginning of warfare. Think about snipers positioning themselves well back in a room or artillery placed inside the tree line fringe facing an open expanse. In-fact most ambushes wouldn’t work without the concealment offered by mind veils.

As a tracker, being aware of mind veils will substantially improve our effectiveness. Normally we are so focused on the ground in front of us we often miss clues in the surrounding area. Although the point tracker in a three-person team must be totally focused on the line of sign, the flanking trackers can easily scan their respective fields of observation beyond the veils.

See you on the trail,
Bart 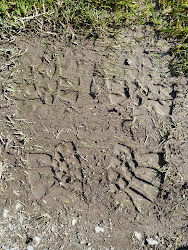